Congratulations to Ted Simmons... and Joe Mauer. Here is why.

Over the weekend, the Baseball Hall of Fame inducted two new members into the Hall of Fame: Former Saint Louis Cardinals backstop Ted Simmons and late executive Marvin Miller were elected off of the Modern Era ballot, which featured Lou Whitaker, Thurman Munson and Dale Murphy, among others. To be clear: this isn't the traditional ballot featuring former New York Yankees SS Derek Jeter. Here is some background on the traditional BBWAA ballot:

Each year, the BBHOF has four different committees to give another chance for players who missed out on the traditional BBWAA ballot. The Today's Era committee focuses on player contributions from 1988 to the present, Modern Era (1970-1987), Golden Era (1950-1969) and the Early Baseball Committee, which features players from 1871-1949. Each committee will meet twice every five years, while the Early Baseball Committee will meet every ten years.

Now, let's get back to Ted Simmons. Simmons, an 8x All-Star and Silver Slugger, was largely viewed as one of the more consistent hitting catchers to play, but struggled with his defense to start his career, gradually improving. It also didn't help that Hall of Famer Johnny Bench, who is viewed as one of the top all-around catchers, was also playing during that era. However, Simmons didn't fare well on Hall of Fame ballots, which is surprising, consider how his offensive stats match up. Here are some eye-popping (good and bad) stats about Simmons:
Simmons only polled 3.7% on ballots and immediately was eliminated. To Simmons' argument, he was buried in a star studded ballot of future HOFers Steve Carlton, Bruce Sutter and Don Sutton.  After Simmons got elected, he credited sabermetrics for his rise to relevancy. By Simmons getting elected, he paved the way for a lot of players who weren't considered for Hall of Fame, who will now be considered. Enter: Joe Mauer.

Mauer, a career Minnesota Twin riddled with accolades, has often been the subject of Hall of Fame controversy. The 6x All Star, AL MVP and 3x Gold Glover known for his solid offense and stellar defense had a great career, but some question if his move to first base affected his career. Additionally, some critics think if Mauer hit more consistently later in his career, he would have a better chance at getting in. However, Mauer was a better catcher than Simmons, purely based on the following:
I created a statistical comparison chart to analyze the major statistics between Simmons and Mauer. I was surprised at the results and take this with a grain of salt, considering Simmons played six more years than Mauer. 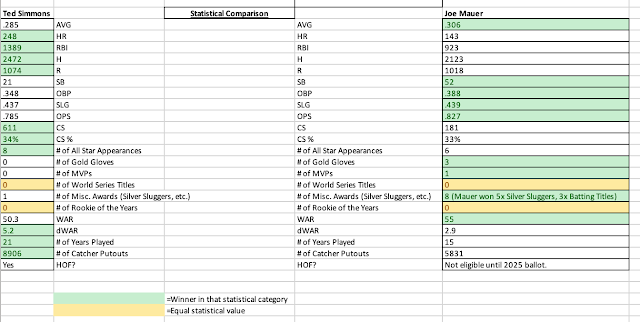 Simmons won the major categories 10-9, leading in some major defensive categories. However, even a novice stathead knows how much of an offensive prowess Mauer was, especially playing six fewer years. Mauer easily won the average category, slightly falling behind in the hitting and runs categories. Mauer produced a 55 WAR, which is impressive, considering some of his injury-plagued seasons. Even though Simmons seemed to be a strong power hitting catcher (posting higher numbers in HR, RBI, H and R) Mauer seemed to consistently hit for contact throughout his career, only posting strong home run numbers a few times.

After analyzing the statistical comparison and doing research, I strongly believe Joe Mauer will be elected in the Hall of Fame. Will Mauer be a first ballot Hall of Famer? No. However, I think he has a strong chance of being voted in on his 6th or 7th time on the ballot, strongly depending on the incoming first ballot players. If he doesn't get elected on the traditional ballot, he will be elected on the Today's Game ballot.

So, congratulations to Ted Simmons... and Joe Mauer, for paving the way.
Posted by Charlie Cowan's Communications at 7:56 PM