My interview with Donald Lutz went awesome. I interviewed him as a member of the Triple AAA Louisville Bats. Unfortunately, he was released about a week after this interview was taken place. Lutz is the first German developed player to play in the MLB. 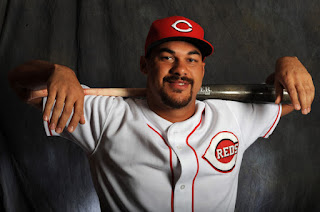 Lutz played for the Cincinnati Reds. Lutz had a .211 career average over two years and had a .987% career fielding percentage with a -0.5 WAR (Wins Above Replacement). Here's the rest of the interview- it was conducted over email (this is a direct transcript).


1. What's an interesting characteristic about you that no one on your team knows?

Haha I I've been around some of these guys for the past 7 years so they kinda know me pretty good!
2.  Who is your favorite German athlete besides yourself (meaning the athlete you admired/revered while you were in Germany)?

My favourite German athlete was always Dirk Nowitzki, not just because of all the success he had but the way he was on and off the field!
3. When was your first professional home run?

My first professional homerun I hit in 2008 I think in the Gulf Coast League against the Twins to complete my first cycle.
4. When was your first hit and who was it off of?

Not sure if you mean professional hit it first hit ever haha
But my first hit ever was an inside the park homerun in Germany
I hit a ball over the center fielders head and ran like crazy lol
5. When did you sign your first autograph?

I signed my first autograph 2007 when I signed my professional contract I also signed my friends reds hat
6.  One state in the U.S. you'd like to visit but haven't yet.... Why?

Hawaii!
Just havnt had time yet or the opportunity to go there but one day I will!
Just heard good things about it and I love traveling the world!
7.  Who's your favorite old-time baseball player?

Funny thing is I don't really have one because I never even watched or heard anything of baseball until I was 15
8. If you had to assemble your starting lineup (all baseball players that have existed), who'd be on the team?

9. The most imposing pitcher you've faced this year is...?

Haven't really faced many guys this year due to injury!

10. Having a short stint in the Majors, how different is AAA life from Major League life?

It's really different in the majors you just get treated like a king everywhere you go!

We had a bunch of funny guys on the team so I can't really point one out!

I like Indy the most it's a really nice park and always fun to play!

13. What's the weirdest experience that has happened to you this year?

I had tommy john lol that was pretty weird.

14.  Where do you see yourself after baseball?

I can see myself being a financial advisor or built my own zoo!!

15.  Who's the best player you've seen come through Louisville?


Donald Lutz (myself)
Posted by Charlie Cowan's Communications at 10:18 AM