Hit It Out Of The Byung-Ho Park

Hit It Out Of The Park

I'm back and better then ever. Kidding. I thought I would post an article since I have ample time and have been meaning to post one for quite some time now. This summer was one of the busiest I've had. I've also had a school year with substantial workload so I haven't had a lot of time to post. This article will just be a summary of the last six months and what I'm doing in the next couple of months. I've been playing a lot of baseball and basketball and have started working. I have started making photo edits on GIMP. For all those who don't know what GIMP is: GIMP is a free photo editing program that is similar to Photoshop (but cheaper!!). I will post some of my edits later (and you'll notice a theme). I also will be talking about the  Rule V Draft and how someone I know was drafted in it.

The Twins recently signed Byung Ho Park, the Korean slugging first baseman, who has hit 50+ homers in the past two years. 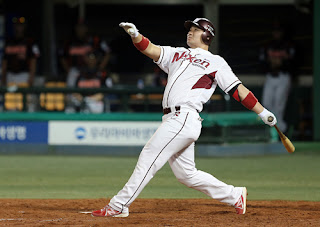 The main question is: Can he reenact his power to the major league level or will he be the next Tsuyoshi Nishioka? For all those who don't know- Tsuyoshi Nishioka was a heralded shortstop who batted .346 in 2009 and won the 2010 batting title. The Twins won the contract rights to him and paid $5.3M. They later signed a contract with Nishioka for three years, $9M w/a $4M team option or the Twins had the option to buy him out in 2014 for $250,000. The hype was similar to the Park signing- could this be the piece that helps the Twins become one of the top teams again? The 2011 season came and went and Nishioka was, to say the least, disappointing (see here). He batted a dismal .226 and only got 50 hits in 68 games. The Twins thought 2012 would be a bounce back year with higher expectations. It was the polar opposite. In the 6th game of the season versus Cleveland, Nishioka broke his leg- therefore rendering him useless for the rest of the season. After that, the Twins went 66-96 and [Ron] Gardenhire was fired two years later. On September 29th, 2012- Nishioka and management officially parted ways. Looking back on the signing, was it good for the Twins?

Nishioka had a NEGATIVE WAR. N-E-G-A-T-I-V-E. His WAR was -2.4 which is horrible. That signing could go down as one of the worst in Twins history. Byung Ho Park will play a vastly different role on this team. He will either occupy the first base position or play the designated hitter. Assume Mauer plays first base and Park gets some, but not a lot, of playing time at first base. Byung Ho Park will be the power source for this team, as the Twins have been lacking the home run stat for quite some time. Ever since Joe Mauer's knee injury, he has hit for less and less home runs each year. And to think we paid about $184M for him .....

Anyway, Park should be a valuable asset if he turns out and produces like he did in South Korea. I'm predicting Park's stat line will be:

That would be an ideal stat line for Park, since Japan baseball varies significantly from the MLB. Park's stats (click here) were astronomical in Japan and he proved to be purely dominant. Park also brings to the table a series of eccentric bat flips (here and here) (he says he'll leave those back in South Korea). It will be interesting to see the learning curve on Byung-Ho Park. Safe to say, this has made a lot of fans excited this perspective season.


GIMP
I've started making photo edits. I varied the opacity on each and tried the blend tool. GIMP is a free photo editing software that you can download onto your computer. I also learned that Microsoft Word can help eliminate the background. Here are some of my edits below:

Hope you guys enjoy these edits! Now I'm going to talk about something that some of you may remember. A part of my blog has been interviews (click here for the complete list) and I've interviewed a player named Maxx Tissenbaum (My interviews with him are here and here). We have been in close contact and he recently informed me that he was eligible for the Rule V Draft. The Rule V Draft is a draft for the teams who don't have 40 men on the roster, to draft prospects and to have them on their 40 man roster for the upcoming season. There is also the AAA phase and the AA phase. I was watching anxiously because Maxx was sleeping. Huh? Why would he be sleeping? He is playing for the Brisbane Bandits, an Australian Fall Baseball League. So it was 16 hour time difference. I saw his name pop up and immediately texted him. He was drafted by the Miami Marlins in the AAA phase. The AAA affiliate for the Marlins is the New Orleans Zephyrs. Tissenbaum has been stuck in High-A for the past two years and has clearly shown that he has been ready for the AA level and beyond. I'm glad he can finally get that opportunity. Anyway, I'm wrapping this blog up. I'm glad to be back blogging and glad to update content for you guys.